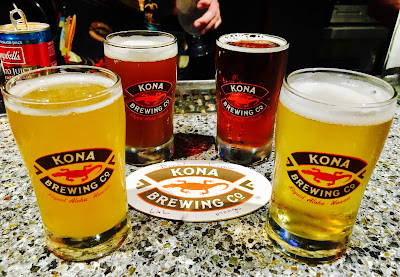 When I first moved to O'ahu a few years ago, there were only a few places to get locally made beer.  Since then, many craft places have opened, all with a unique vision of what beer is.  Going back to the beginning, one of the most special places to go for beer was Kona Brewing Company's Koko Marina Pub in Hawaii-Kai.  At the time, taking the bus out there from the city was a trek.  Their food was different, beers excellent, and the lanai on the water picturesque and distinctly Hawai'i. 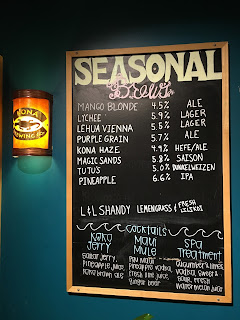 In 2014 I got to visit the original brewery in Kailua-Kona on Big Island, which I loved. As time went by and I had new locally made truly craft breweries opening all over the island, it was rare to head back to Kona's Pub. Going there didn't feel special anymore; times had changed quickly. I won't go into the controversy in this post over what is "craft beer" and what does "locally made" mean; but the fact is, Kona Brewing Company makes some really good beers.  In the past year or so, I've seen another turn around in the Koko Pub; it's fun to come here again. The staff is plentiful, professional, and seem to truly love their jobs. The quality of food has gone back to what I remember.  And most important: beer is key again.  Kona always had a fantastic selection of beer types, but lately they've been experimenting more both with global beer trends and Hawai'i inspired ideas. For a long time I'd stop in and have nothing new to try; now, it seems there's always a handful of new limited and seasonal brews.

The Pub is still somewhere I love to bring out-of-town guests, especially since Kona beer is known across the country. What sparked this post?  Yesterday, my family went on an east side excursion to eat with the ultimate destination of seeing the sunflowers at Waimanalo Country Farms and playing disc golf at Bellows Air Force Beach Park.  The plans came together last minute and it ended up being the perfect day. On the way home, parched from the heat and sun, we stopped at the pub.  I was thrilled to see a nice list of seasonal summer beers, with four new ones for me to try. The bar area was packed, I took an individual seat at the end near the server area.  Special thanks to my bartender for talking about the beers with me, organizing the flight, and giving me a few free samples of other beers. It made for yet another great time at Kona's Koko Marina Pub!

(If anyone from Kona Brewing Company is reading, a suggestion about Untappd: The brewery is an Untappd Verified Venue. I was excited to see the Koko Marina Pub was also earlier this year, although briefly. I've since noticed it not longer is, which is a disappointment. Please consider trying the platform for a longer period, the live menus work wonders for constantly changing selections.)