Maui Brewing Co. opened their fourth location in the state this weekend at the Lau Hala Shops in Kailua Town on Oahu. The area was formerly Macy's and has since been developed into commercial spaces and a new parking garage and neighboring lot. The opening of the MBC Kailua Restaurant is a welcome addition as it offers local beer at an open air bar and dining area with Hawaii sourced ingredients.

Special thanks to Cindy Goldstein and owner Garrett Marrero for the invitation for Kristine and I to the private soft opening event. For our dining experience we met Cindy at the host stand and we were all taken to our table for the evening. I believe the entire staff was working as the event was designed to help train the servers, bartenders, and chefs. Everyone was extremely friendly and happy to be open and serving the first customers. Thank you to our server Marissa for the excellent service and always answering our questions, and to Floyd for remembering us from Waikiki and dropping by to chat.


The restaurant is modern with exposed concrete and subdued colors. The wood tables are bright and big enough to spread out. I loved the orange and blue bar chairs, they really popped.  As far as art goes, the mural painted by Kamea Hadar highlights the island vibes with a woman holding a bundle of hops and grain. As Garrett pointed out, her tattoo sleeve is a stylized interpretation of the beer ingredients of the Reinheitsgebot: grain on the shoulder, water on the upper arm, hops on the elbow, and yeast at the bottom. The high ceilings give a cool, bright, and airy vibe; I'm sure it'll stay comfortable even in the summer. They offer inside and outdoor lanai seating, but the entire place is open to the outside. The bar seats face the main street and would offer a great place to people watch. For sports fans, they have TVs around,  but they don't detract from ambience. One special note is how much I appreciated the well-designed restrooms, I always privately thought many small rooms is a must for a bar!

As part of the event, we were each given a unique menu to ensure a good mix of orders for the chefs to practice. The three of us opted to order a bunch and share everything. The menu is similar to that of the Waikiki location with some differences. Please see the photos and captions for some of the highlights. As far as beer goes, they will have a selection of 12 MBC beers and 4 guest taps. For our evening, we were treated to their core beers and one special treat: the newly tapped Imperial Hemp Brown ABV 8.7% IBU 25.

With our bellies full, Kristine and I visited Grace in Growler's new expansion including Grandma's Living Room, their bottle selection, and outdoor lanai. It's worth checking out!  We also tried two new beers at Lanikai Brewing Company, we hadn't been there in a while.  It's safe to say, Kailua has a great beer scene all by itself!

A Look Back on 2018 and BJCP Exam Results

With the announcement of BJCP classes being offered for free on O'ahu in early 2018, I didn't know it would set my focus for the year. In the fall of 2017, I volunteered to be a steward for the first Oahu homebrew competition, which offered a window on the world of beer judging. I knew right away I wanted to take the courses but was unsure if it would yield anything, including whether or not I even wanted to take the exam. For those following along, there were half a dozen monthly classes focusing on many topics related to the BJCP and beer in general. More on this later.

The latter part of this year ended up being all about my own personal beer journey, as is the theme of this post. If you're reading now and have been all year, I thank you for taking the time to do so! It's fun to share all the opportunities that are out there to learn about beer and not just get drunk every weekend on the same swill.  Part of my lack of motivation for not writing as often as I originally planned is that there are too many little happenings to keep up with on this medium, and simply not enough big ones worthy of the effort. For the most part though, the holidays are a busy time of the year for my hobbies outside of beer! For the little things including beer notable beer releases and smaller events, be sure to check out my Instagram at alohastatebeer. Two of my favorites were the New Belgium Sour Symposium at Village Bottle Shop and the re-inauguration of the HOPS Homebrew Club in Kailua!

We had two beer festivals on Oahu. There were many tap takeover events and pub crawls around, including with the Hawaiian Craft Brewers Guild. I was hired by them to design the new website, which quietly went live a few months ago. Please check it out here.

My personal highlight was the much-delayed publication of my article about the growing beer scene in Honolulu in BeerAdvocate magazine. I had a ton of fun writing it and sharing it, and this is the last I mention it, I promise!

There were no brewery openings on Oahu in 2018, but we did get to experience Paisley Meadery downtown and Paradise Ciders' taproom in Kalihi. I know there are many coming down the pipe, so 2019 should be an exciting year for new beer!  I was honored to be invited to Aloha Beer Company a few weeks before the release of three new beers; it was great to talk to Dave, taste unfinished products, and share my experience. 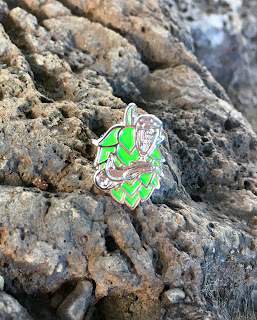 In October, a group of seven of us took the tasting exam, which was hosted by Aloha Beer Co. in the HiBrau Room on a Saturday morning. It was a fun yet exhausting experience; taste, think, and describe 6 beers in 90 minutes with no access to notes or guidelines.  The written exam scoresheets are graded by experienced judges, so in the time between I figured I'd start working on something else.

I started with the Road to Cicerone Coursebook: Brewing Ingredients and Process. These books offer a focused approached to a single group of subjects and include the coursebook and exam.. Once you pass, you get a badge on your profile and subject pin to compliment to the one for Certified Beer Server. I passed in mid-November and received my pin shortly thereafter. I purchased the Beer Keeping & Serving book, which I'll be starting in the new year. I saw the Certified Cicerone exam is scheduled on Oahu in the spring, but that is probably too soon for me to tackle. 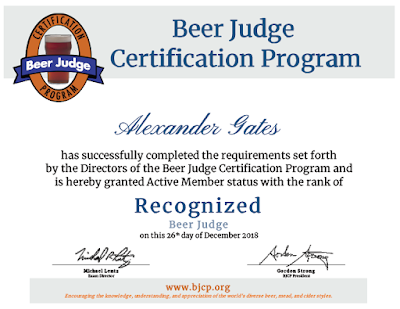 That brings us to today. I received the exam results for BJCP and could not be happier! I passed the tasting exam at a percentage level high enough to be awarded Recognized Judge immediately and eventually Certified Judge rank when I accumulate enough experience judging points. I earned two in November's Brew Oahu Homebrew Competition, so I only need three more for the next rank. It'll be fun gaining experience at competitions around the state!