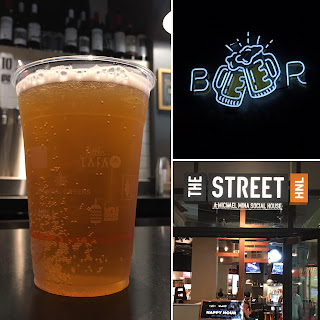 It had been a while that Kristine and I attended a Yelp event, so we RSVPd for one that sounded fun at The Street A Michael Mina Social House. The concept of the business is like food markets around the world: lots of sights, smells, and flavors all together in one location. Among many food options, they also have three bars each specializing in a different type of booze. Needless to say, the one called simply BEER was my favorite. Thanks to the generosity of the business and Yelp Hawaii, we were each given one of the VIP badges (usually $37) that has 7 stamps for a special dish at each restaurant, a cocktail, or any draft beer.  At the beer bar, they not only had a great selection, but also a locally brewed beer only available for purchase and enjoyment at The Street! Brewed by Honolulu Beerworks in Kaka'ako, The Street Beer was a nice balanced selection, perfect to compliment all the varied food types available. To make it feel more local, it has a light taste of roasted coconut.  Speaking with the general manager, I learned that Michael Mina reached out to all the local breweries but Honolulu Beerworks won the selection process with not only the flavor of the beer, but willingness to work together. If you're in Waikiki, The Street is worth checking out as is The Street Beer!

The Street Beer
Posted by Alexander at 9:56 AM