The first ever Hawaii Craft Beer Awards were held this weekend. It was a two-day celebration of 100% locally made craft beer. I was thankful to be invited. Steve Haumschild of Lanikai Brewing Company came up with the idea and hosted the event at Tap & Barrel in Kailua. The event benefited the Hawaiian Craft Brewers Guild, with ticket sales and scrip going to help the guild further promote local beer.

Friday an independent judging panel was invited to Tap & Barrel to sample and enjoy the beer. Certified Cicerones Tim Golden, Bill Carl, and Pablo Scurto were joined by BJCP Judges Shawn Crawford, Vince Gallo, Eddie Kowal, Bob Hillier, and I. Cindy Goldstein, the executive director of the guild, planned and organized the judging. We received over 100 beer entries from guild members all over the islands; it was a tough job! Categories included popular styles like IPAs,  Stouts/Porters, Sours, and others. Unique for this competition, we also judged the best collaboration beer, best beer using Hawaiian sourced ingredients, and best label art.  Two categories were voted on by the brewery-members themselves: best new brewery, and brewery of the year (the company that contributes most to the advocacy of local beer). After the hard work was done, we enjoyed Lanikai’s celebration of two years of Tap & Barrel, as well as the leftovers from the competition!

Saturday was the real party. That evening was the Awards Ceremony in their outdoor parking lot. For a first year, it was a great event with lots of happy beer enthusiasts. The last category was presented here: Peoples Choice. A dozen kegs were marked with style only, the entry ticket got everyone a 1oz pour to sample and choose the favorite. Full pours were also available. A DJ supplied the tunes and the guild had a swag table. The indoor bar was also very busy with a few food trucks along the street providing much-need grub. 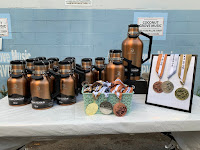 The real entertainment was the presentation of awards: MC’d by Cindy and Steve, they presented third through first of each category with the sponsored prizes they received. Each group got pictures taken with their awards. We took a rain break halfway through, which just added to the fun. Attendees seemed happy throughout, drinking beer while celebrating those who make it. Join us next year! 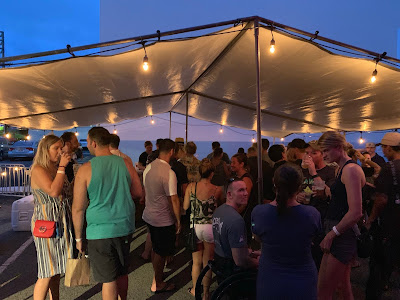 Posted by Alexander at 8:58 AM