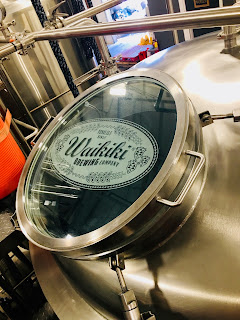 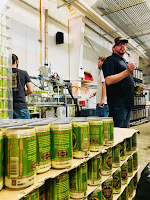 Hawai'i never ceases to amaze. With a relatively small population and isolated geography, you can literally find a club or group for any interest. O'ahu has a few homebrewing clubs. I personally don't have the space to brew at home, but it seemed like a great way to meet like-minded people and learn more about the process of making beer.

I jumped in at the right time. Homebrewers on Pacific Shores, or HOPS, had a pub crawl last weekend. Right from the start, people were friendly and ready for the day. Decked out in beer gear, we all met at Waikiki Brewing Company's Kaka'ako pub for lunch and a tour. It was very well organized thanks to Cindy and Siri: name tags provided, arrangements made with breweries, and just a well thought out full day.  The club is an all volunteer organization that supports the hobby. At Waikiki, we learned about the new facility with headbrewer Joe Lorenzen. They were clearly proud of the restaurant/bar area and their gleaming new equipment. The larger space gives them more room for canning and the ability to brew more than they ever could at the original location. 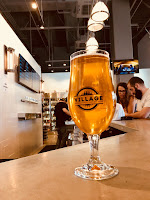 From there we walked to Village Bottle Shop & Tasting Room, a usual haunt. Tim Golden talked about his concept for the place, which is why we like it so much there. "I'm done with dank." 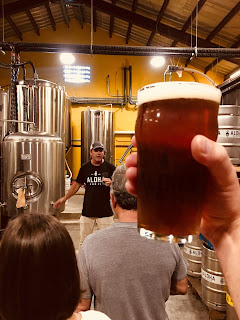 We then walked to Aloha Beer Company where we had some pups. We met owner Dave Campbell for a beer history lesson, which was fascinating. He's been brewing for decades and owned the first homebrew store in Hawai'i. They graciously extended us their new British pint promotion: larger size glass with normal priced refills, plus take the glass home! 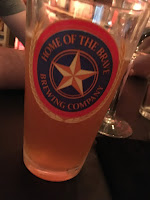 Last but not least, we headed to Home of the Brave Brewing Company / Brewseum. Here I finally got to try the Wiki Waki Woo Brew Hefe and some other newbies on tap. It's such a festive and fun place, all the newcomers loved it. We spent time in the Wiki Waki Woo Speakeasy too!  Owner Glen Tomlinson was working his cocktail magic.

Drinking is fun, but drinking with new friends is even better! 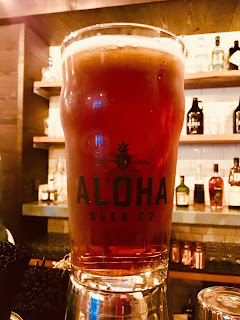 Posted by Alexander at 4:00 PM